stronomy in the World of Avatar 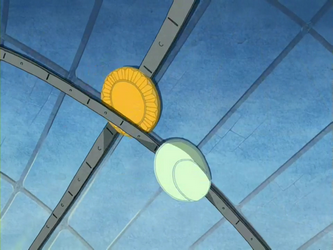 People in the World of Avatar have limited knowledge about the universe around them. This extends to knowledge of eclipses and solstices, which feature extensively in Avatar history and events. This knowledge is vital, as astronomical occurrences can directly affect bending power.
Spirits and people in the Avatar World maintain repositories of this information in various locations of the Avatar World, though much of it has been lost with the reign of the Exalted Emporium.

Outer Space
Outer Space is the term for the massive amount of empty space surrounding the entire world of Avatar. It takes up the entire universe.

Eclipses
People know the cause of eclipses and it can be predicted through a Planetary Calendar Room in Shi Tong’s University. An eclipse is an astronomical event that occurs when one celestial object moves into the shadow of another.

Lunar Ecipse
Waterbending draws its power from the Moon. During the events of a lunar eclipse the light from the moon is shaded from view completely, causing Waterbenders to lose the ability to bend. 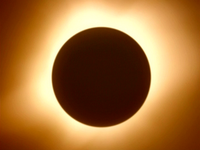 Solar eclipses, known as the Day of Black Sun in the World of Avatar, refers to a day in history when a solar eclipse occurs when the sun is entirely blocked out by the moon and rendering Firebenders powerless.

Solstices
A solstice is an astronomical event that occurs twice a year, when the tilt of the Earth’s axis is most oriented toward or away from the Sun, causing the Sun to reach its northernmost or southernmost extreme in the sky during the day. Solstices can be predicted too. During the Solstice, the spirit world and the natural world are at their closest, and during the Equinox they are at their farthest.

Winter Solstice
The Winter Solstice is a natural phenomenon that occurs when the sun is at its greatest angular distance from the equator. It is also the shortest day of the year. In the Avatar World, as the solstice approaches, the natural world and the spirit world grow closer together until the line between the two is blurred. During the solstices the spirits can exert incredible power in the natural world. This is also the ideal time for people (with the ability) to enter the Spirit World. Some spirits can appear in the real world for a short time on the solstice..

Summer Solstice
The Summer Solstice is a natural phenomenon, occurring when the sun is at the closest angular distance to the equator. It is also the longest day of the year. In the Avatar World, the Winter Solstice, and the Summer Solstice are the only times that the Spirit World and the mortal world come close together enough for some spirits to interact freely with the physical world for good amounts of time.

Comets
A comet is a small solar system body that orbits the Sun and, when close enough to the Sun (and in Sozins Comets case at the edge of Earth’s atmosphere), exhibits a visible coma (atmosphere) or a tail — both primarily from the effects of solar radiation upon the comet’s nucleus. The coming of a comet can be predicted.

Sozin’s Comet
Sozin’s Comet is a comet that seems to pass close to the world of the Avatar every hundred or so years. The comet passes close enough that Firebenders are able to draw power from it as they normally do the sun, greatly increasing their powers. At this point in the avatar world the comet has not been named yet, as its’ timing of arrival has not been predicted yet by the people of the avatar world. It would be Fire Lord Sozin in the year 1 B.S.C. – 1 A.S.C. who would utilize the comet to preform a military action. This is when the comet would be named Sozin’s Comet and would be the new standard of time calculation in terms of Before Sozin’s Comet (B.S.C.) and After Sozin’s Comet (A.S.C.)
Meteorites Edit

Meteorite
A Meteorite is a natural object originating in outer space that survives an impact with the Earth’s surface.

Lunar Calendar
A Lunar Calendar is a calendar that is based on cycles of the moon phase. It is used in the World of Avatar. 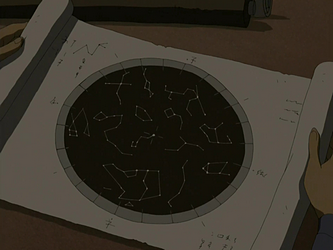 The Star Chart is a map of the stars and constellations. The constellations shown on the star chart closely resemble the Northern constellations of Earth, with the equivalent of Earth’s North Star centered on the chart, presumably allowing those who use it to find true north when in the Northern Hemisphere of The World of Avatar.

Eclipse Glasses
These glasses were invented for use during an eclipse, as prolonged exposure to the eyes can damage one’s retina.

Sunstone
A Sun Warrior treasure, the Sunstone is kept hidden inside a room in the Sun Warriors’ Ancient City which is supposed to be unlockable only during a solstice.

Telescope
An object used to spot things from afar, often used by sailors and military officers.

Celestial Calendar
Located in center of the courtyard at the Sun Warrior city is a large orange gem that refracts slivers of light onto a calendar on the ground. This gem is part of a celestial locking system that protects a sacred room. The room can only be opened on specific days, like the summer solstice. The Fire Sages also had such a calendar in the sanctuary of their temple on Crescent Island.